Evolution of a Stamper!

I needed a card for a friend who just had a baby boy. And I had recently gone through some things in my craft rooming trying to clean up. Yeah, you read right I tried to clean my craft room!!! Really I just look through all my stuff and move it around or sometimes go through my stuff, give up sorting, and put it right back. Anyway, I found a few "Thank You" cards that were leftover from four years ago that I made to give for meals and gifts that we had received. I remember (I think) that I liked them, and I guess they are alright but just not quite enough for me now. So, I decided to repurpose one of them. It wasn't hard because the adhesive I used back then didn't stick so well. Sorry to anyone who has one of my old cards that are falling apart! 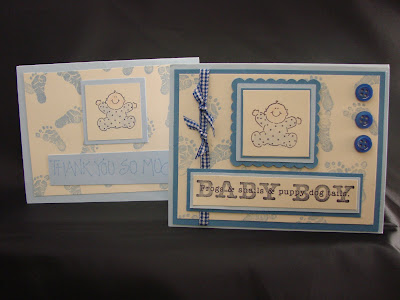 I used one of the very first stamp sets I ever purchased, Cuddles & Tickles. If fact, it was my very first order ever of any kind of stamp. Excuse me while I reminisce. I was pregnant with my now 5 year old daughter ( I have been pregnant a lot) and was the leader of the women organization of our church. I have a very, very, good friend, one of the best women you could ever meet. Anyway, she was one of my counselors at the time and she was or rather is a stamper and a scrapbooker. She invited me to go to a home party with her, paper crafts or such. I wasn't really very excited but went anyway. I had a BLAST!! And being the women's group leader I thought it would be nice to make cards for the sisters in our ward. We did, at that time, have 10 sisters pregnant so I knew I could use this set. The other set I got was Simple Sketches. So I could make birthday, thinking of you, and thank you cards. I bought I few ink pads, a black pad and the colors I thought I would need and I think I got the chalks. I remember the hostess said she just cleaned her stamps with baby wipes, had that one covered. I did however, find out that baby wipes just wasn't going to work for me. I know lots of women that use them and love them. It's just not for me. I got some card stock from Wal-Mart and I thought I was set. I quickly became an addict though and turned around and ordered $150, sort of like a catty workshop, I guess. And now I am sure, over 600 sets later, here I am! THANK YOU Diane!!
Recipe for the new and improved card is: I added an extra layer of card front. Somehow there was enough room???? The darker blue is just some card stock that I had in my scraps. I added the same color in a Scallop Square and square layer. I changed the "Thank You", of course. That would have been silly to thank her for having a baby. It is not like she will give him to me or anything. I switched it with the Baby Boy sentiment from SU Word on Word set and layered it with the same colors. Some ribbon and buttons were added and voila! NEW card!


Thanks for checking in and reading all my ramblings.
Which do you like better?
Posted by Laurie HIMCR at 10:18 PM 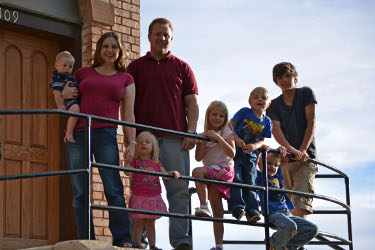